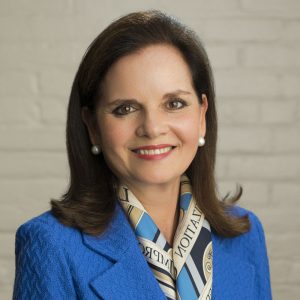 Since 2005, Clotilde has led the Community Foundation’s strategy to create meaningful community change on behalf of the clients who have chosen to support this work. The Community Foundation brings together community partners to advance significant change including Say Yes Buffalo, Greater Buffalo Racial Equity Roundtable and the WNY Impact Investment Fund, to name a few. Seen as a changemaker, Clotilde’s work has attracted more than $93 million to Western New York to support these collective efforts.

Clotilde is the immediate past chair of the Foundation Center- which recently merged with Guidestar to form Candid. Candid is widely considered the premier source for global social sector information. She is also a member of the boards of FSG, Executives’ Alliance to Expand Opportunities for Boys and Young Men of Color, and the Global Fund for Community Foundations.

In recognition of her civic sector expertise, Clotilde was appointed to the White House Council on Service and Civic Participation and named co-chair of the U.S. Committee of the United Nations International Year of the Volunteer. Clotilde speaks frequently about the role of philanthropy, community impact and nonprofit governance around the world. She presented at the U.S. Partnership on Mobility from Poverty Summit supported by the Bill & Melinda Gates Foundation in Washington, D.C. and the Asia Forum on Philanthropy for Better Cities in Hong Kong.

For her contributions, Clotilde has received numerous honors and awards, including accolades from the Points of Light Foundation, the Governor’s Award for Service, the President’s Award for Service and The Buffalo News Citizen of the Year Award. She was named the 2018 Buffalo Niagara Executive of the Year by the University at Buffalo School of Management. She has also received the Dean’s Service Award from the State University of New York at Buffalo Graduate School of Education and the Canisius College Distinguished Citizen Award. An alumna of both institutions, Clotilde received her Bachelor of Arts degree from Canisius College and Masters of Arts degree in Education from the State University of New York at Buffalo. She is a naturalized U.S. citizen and a native of Cuba.