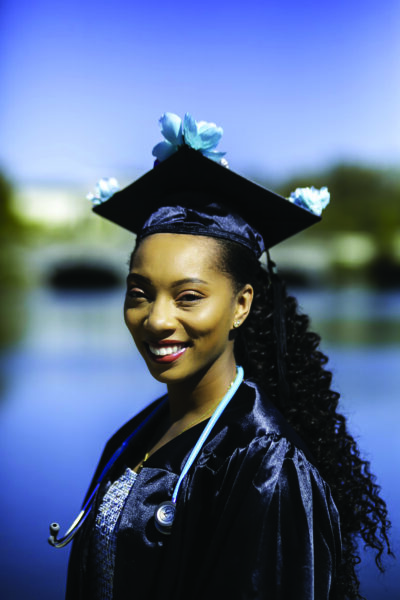 Creating a supportive environment where students can flourish

Tyler is one of more than 2,000 students who have earned degrees with the support of the Say Yes Buffalo scholarships since its launch in December 2011. At that time, the Community Foundation played a key leadership role in bringing the collaborative effort to Buffalo. Today, the story of Say Yes Buffalo is one that spans more than a decade, with its earliest scholars now out of college, into their careers and contributing to our region’s economic growth.

In 2012, the graduation rate of Buffalo Public Schools students was a mere 49 percent. With Say Yes Buffalo’s promise to provide scholarships to eligible graduates of Buffalo public and charter schools, as of 2020, the district’s rate had climbed 27 percentage points to 76 percent. Today, students can use those scholarships to attend all SUNY/CUNY schools and more than 100 private colleges and universities across the country.

To ensure the scholarships are available forever, Say Yes Buffalo is currently working toward a goal of raising $100 million for its endowment at the Community Foundation. Over $25 million has been raised to date and all donations to the endowment are eligible for a match.

Since its inception, Say Yes Buffalo has expanded its reach to support children as young as preschoolers with services including preventive supports, legal clinics, healthcare and summer camps. It also now extends support to college students, including mentoring, mental healthcare, on-campus success counselors and paid internships. “Say Yes helped me with resume building and interview skills, and sometimes just provided a listening ear,” said Tyler. “It also opened my eyes to the different routes I could take to get to where I wanted to go.”

Programming for high school students will soon include apprenticeships in high-demand career pathways with large local employers across the IT, Business Operations and Advanced Manufacturing sectors.

With hundreds of partners from the public, private and nonprofit sectors, Say Yes Buffalo is committed to strengthening the Western New York economy by investing in the education of Buffalo’s future workforce.

Tyler noted, “It is inspiring to see how many students are able to fulfill their dreams because
of Say Yes Buffalo.”

We continue to help many more students attain post-secondary education as a partner, supporter and advocate of Say Yes Buffalo.