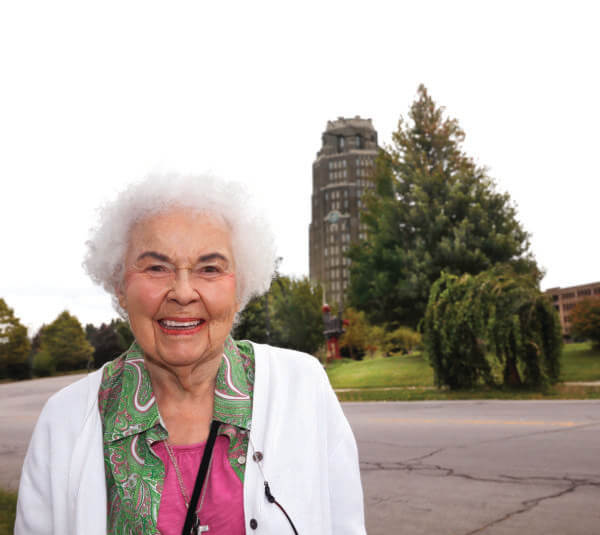 “The question for me is—and always has been—what are the most important causes that I should contribute to? How can I be a good steward?” Those were sentiments the late Anne Bird shared with the Community Foundation. Whether contributing to causes most important to her or figuring out how to support the ever-changing needs of Western New York, those were the questions she always strived to answer with the Community Foundation’s help.

Born in Boston, Massachusetts, in 1927, Anne graduated from Duke University in North Carolina, then headed to Ohio, where she met her husband, Charles. They started a family and lived in several American and Canadian cities before settling in East Aurora in 1966.

Years later, when the couple began thinking about how they would leave their mark on Western New York, they were introduced to the Community Foundation by their attorney. In 2001, they established the Charles A. & Anne L. Bird Fund to support the organizations they cared about.

After Charles passed away in 2005, Anne, a lifelong learner, continued to study our region’s needs and solutions through the Community Foundation’s newsletters and annual community impact tours. Those experiences expanded her charitable interests. A 2010 tour to a local urban farm that works with teens to build community through growing and selling vegetables, composting, chicken raising and fish farming was really meaningful to Anne. She began supporting the organization because it reminded her of similar work her late grandson had done. “I will contribute to honor the memory of my smart, funny and dedicated grandson and to ensure the continuance of the kind of youth development work he prized so highly,” Anne shared.

As Anne’s giving changed over time, her ongoing commitment to learn and think about how she could make a significant impact shaped her legacy.

Upon Anne’s death in 2020, her endowment supports the areas of mental health, urban farming, food distribution, the stewardship of water resources, and specific charities important to her and Charles. Because Anne understood there will always be community needs that cannot be foreseen, she also created an endowment for the changing needs of Western New York over time. Through these funds, Anne continues to be a good steward of the community she loved so much.