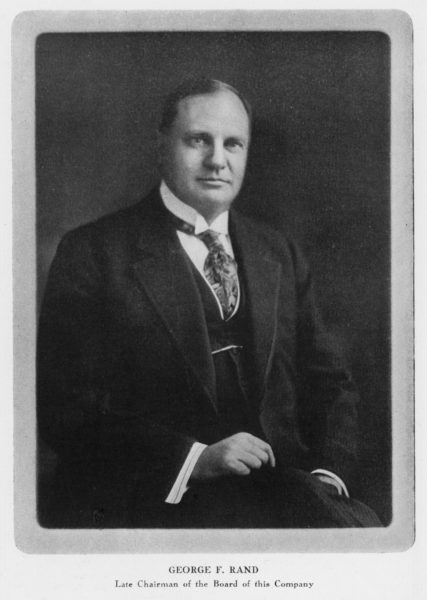 In 1919, American soldiers were returning from World War I, prohibition was adopted and dial telephones were introduced. That same year, George F. Rand Sr., President of Marine Trust Co., asked his attorney, Edward H. Letchworth, to visit the first community foundation in Cleveland, Ohio. After that trip, George Sr. recognized the unique role a community foundation could play to enable families, including his own, to give back for generations to come.

George Sr. and his wife had four children, including George Jr. Upon the passing of his parents, George Jr. carried on his father’s wishes by establishing the Buffalo Foundation, now the Community Foundation for Greater Buffalo, and creating the first endowment to address the changing needs of this community.

Following in his father’s footsteps, George Jr. became president of Marine Midland Corporation. He also served as Director of the Buffalo Foundation. George Jr. and his wife, Isabel, had three children, including Calvin, who went on to carry on his family’s generosity in many ways – including founding the Shaw Festival at Niagara-on-the-Lake.

The late Calvin Rand observed that many families who had ties to the Community Foundation in 1919 maintained their relationships over time, generation to generation. “That is because of people doing the right thing and being committed, and it says a lot about the leadership at the foundation for all these years,” he once said.

Calvin’s brother, George III, who also worked at Marine Midland before forming Rand Capital Corp in the 1960s, supported many local organizations, including the Buffalo Philharmonic Orchestra.  George III and his wife had six children, including Jayne.“My father did a great deal to carry on our family’s legacy,” said Jayne Rand about the late George III. “As busy as he was in his professional life, giving back was just always something he did and something he assumed his children would do too.”

Jayne is now the fourth generation of the Rand family who is committed to giving through the Community Foundation. She is a member of the Community Foundation’s Legacy Society, which acknowledges individuals who have committed to supporting the community in the future through a planned gift. Jayne is also a member of the 21st Century Fund and a leader on its steering committee.

Today, 100 years after George F. Rand Sr. first envisioned a community foundation where people and organizations would work together to improve lives in Western New York, his gift endures. The generosity of the Rand family continues to make its mark on Western New York.