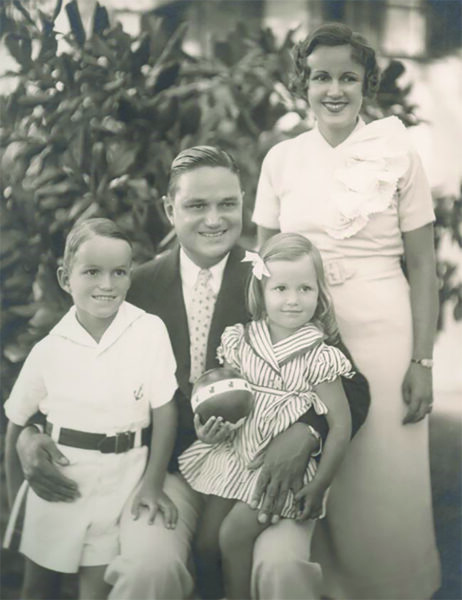 “Our story is about carrying out the charitable legacy our parents and grandparents built, which is why we have chosen to give through the Community Foundation,” reflects the third generation of the Hahn family.

For the Hahns, generosity has come naturally for generations. “Giving is in our blood,” is how they describe the legacy of giving that has been instilled in them.

Their grandfather, Charles Hahn, was born in 1903 and came from humble beginnings. He married Marion Sattler, whose father founded Sattler’s Department Store in Buffalo. Charles took over the day-to-day operations of Sattler’s, which, at its peak, employed 800 people. He was known to his employees as being a very generous man, rewarding their hard work with sizeable bonuses.

Marion passed away in 1963, and Charles continued to share his time, talent and treasure, eventually establishing the Hahn Family Foundation in 1970, with the help of his son Jack, an attorney, and his daughter-in-law, Anne.

Jack was a graduate of both Princeton University and Harvard Law School. He was involved in many community and philanthropic organizations in and around Western New York, and was especially passionate about the arts. Anne brought a deep connection to the environment, and sought ways to support efforts focused on ecology. Through the Hahn Family Foundation, they supported causes that were most important to the family, including the arts and the environment.

After Anne passed away in 1998, and Jack in 2014, their children wanted to continue to honor their family’s legacy by focusing more on giving and less on the required administrative aspects of managing the Hahn Family Foundation. They turned to the Community Foundation to alleviate the administrative burden. “We sleep well because we know that the Community Foundation is taking care of dotting the i’s and crossing the t’s while we are taking care of the causes important to us,” they said.

While they remain committed to supporting the environment and the arts through these challenging times, they also appreciate the Community Foundation’s dedication to understanding the needs in Western New York, whether new or those exacerbated by the pandemic, and its dedication to finding solutions.

This story is featured in our 2020 Annual Report.