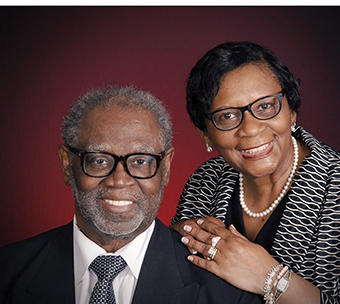 It was the 1960s and Bonita Cobb was in her middle school modern history class in Cincinnati, Ohio. She sat in front of a shy, athletic student named Henry Durand. Little did she know then that she had found her soulmate.

The high school sweethearts were awarded scholarships to separate colleges – Boni to Kent State and Henry to Denison University, where he was one of only five black students to enter the college in 1966. Henry was a varsity team starter playing offense and defense for his four year career and holds the distinction of being the first black captain of the otherwise
all-white Denison University football team.

After college, Boni and Henry married and started a family, moving to Western New York in 1990 when Henry was offered a job at the University of Buffalo as director of its Educational Opportunity Program. Boni later secured a position as Chief of Staff to the President at Buffalo State College. Seeing the need to provide cultural support to students of color, the Durands began to help in any way they could, such as hosting Thanksgiving dinners for students that could not afford to return home for the break.

Boni was introduced to the Community Foundation by Board member Alphonso O’Neil-White and learned about the Communities of Giving Legacy Initiative (CGLI). “I found it fascinating that there was an initiative like CGLI that was committed to the group that Henry and I worried about all the time,” Boni said.

She joined the Community Foundation Board in 2015, and the Durands began contributing to the CGLI endowment. “It is kind of an extension and a more formal way of continuing to do the work that we always did,” explained Boni.

Henry passed away in 2018, but Boni knows that through the Community Foundation, the good he always did will live on forever. “People took a chance on us. People saw potential when we did not see it ourselves, and now it is our time to do that for someone else,” she said. “It is important to pay it forward.”