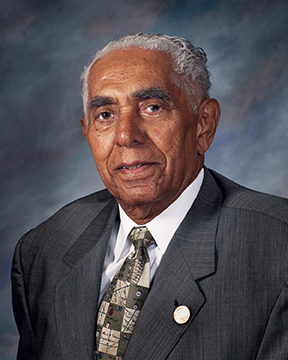 A Champion for Change.

Veteran. Teacher. Police officer. Not only was Frank Mesiah all of these things, but he also worked tirelessly to advance racial equity in Western New York.

For nearly 20 years, Frank served as president of the NAACP Buffalo Branch, whose mission is to secure the political, educational, social, and economic equality of rights in order to eliminate race-based discrimination. He also served as First Vice President of the New York State Conference of NAACP Branches and as Regional Administrator in the Division of Equal Opportunity Development of the New York State Department of Labor. Even after retirement, Frank continued to conduct educational workshops on diversity, harassment prevention and affirmative action programs.

Locally, Frank was known for his steadfast work to advance civil rights. A long-standing resident of the Parkside Community, Frank helped establish one of the oldest block clubs in Buffalo.

To honor their father’s incredible legacy of fighting for justice, Frank’s children established the Frank Mesiah Family Legacy Fund at the Community Foundation to support the community’s changing needs. Now Frank’s legacy will serve as a catalyst for positive change in Western New York forever.