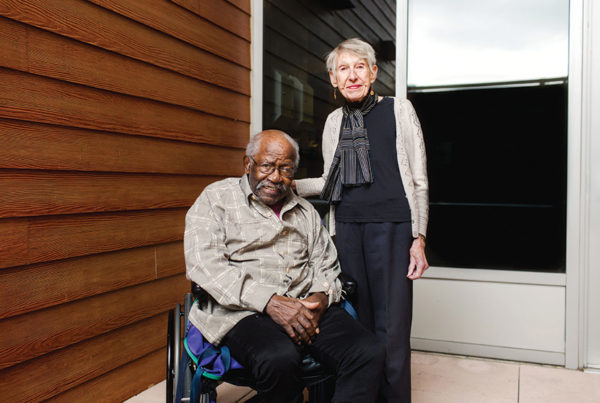 If Sylvia Coles could describe her husband’s character in one word, it would be perseverance. Born at a time when breaking through race barriers in certain careers was discouraged, Robert Traynham Coles overcame many obstacles to become a well-known architect who continues to make his mark on Western New York today.

Growing up in the Cold Springs area on the east side of Buffalo, Robert’s family was one of the only African American families in the neighborhood. His father worked for the United States Postal Service and his mother was a homemaker.

Robert attended Buffalo Technical High School, where he enrolled in a course called Building Design. “I took to it like a duck takes to water,” Robert recalled. He felt that architecture was his calling, but his teacher told him it would be a waste of time to pursue because there were no African American architects.

Instead of taking his teacher’s advice, Robert became even more motivated to follow his dream and blaze a trail for others. “I decided that I would become an architect and the best darn architect I could,” he said. Soon after, Robert heard about Edward H. Moeller, who, through the Community Foundation for Greater Buffalo, had established scholarships for Western New Yorkers who wanted to study architecture. Robert was awarded the scholarship, which he put toward earning his degree at the University of Minnesota.

Robert met and married Sylvia and the couple headed to Cambridge, Massachusetts, so Robert could pursue his post-graduate degree at the Massachusetts Institute of Technology. His career began to take shape, with his wife and their two children by his side. They found themselves back in Buffalo when an architectural and engineering firm called him and asked for his help.

In addition to designing their own house on Humboldt Parkway in Buffalo, which is now a designated historic landmark, Robert Coles went on to design several other buildings in Western New York, including University at Buffalo’s Alumni Arena. He lists the JFK Community Center and the Merriweather Library among his most meaningful work.

As they were both approaching 90, Robert and Sylvia wanted another way to leave their mark on Western New York. “We have more resources than we need to take care of ourselves and decided we wanted to give something back,” Sylvia said. The Coles’ attorney suggested they look at the Community Foundation, which manages the charitable legacies of hundreds of generous individuals. Robert and Sylvia made plans to establish a scholarship fund after their lifetimes that will benefit African American and other students of color looking to pursue a career in architecture. “We hope this scholarship will give them the means to implement their plan, just as a scholarship did for me,” said Robert. Mr. Coles passed away in May 2020 at the age of 90.

Sylvia appreciates that their legacy of giving back together will live on.