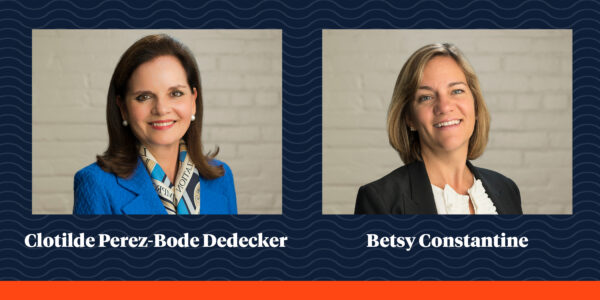 Buffalo, N.Y. — The Community Foundation for Greater Buffalo Board of Directors announced today a planned leadership transition. Current President/CEO Clotilde Perez-Bode Dedecker will be retiring at the end of 2022 and Executive Vice President Betsy Constantine will become the new President/CEO as of January 1, 2023.

“On behalf of the Board of Directors, we are grateful for Clotilde’s visionary leadership at the Community Foundation during her illustrious career. She has dedicated her life’s work to improving lives in Western New York and has been a powerful catalyst for change in our community and beyond,” said Melissa Baumgart, Community Foundation for Greater Buffalo Board Chair. “It should come as no surprise that she has thoughtfully and strategically planned this leadership transition to seamlessly continue moving the mission of the Foundation forward with the full support of the Board.”

Since 2005, Clotilde has led the Community Foundation’s strategy to create meaningful community change by bringing together public, private, nonprofit and government partners to tackle systemic issues facing the community. A few of these unprecedented partnerships include Say Yes Buffalo, Greater Buffalo Racial Equity Roundtable and the WNY Impact Investment Fund. Recognized as a changemaker on the national stage, Clotilde’s work has attracted more than $100 million to Western New York to support these collective efforts. During her tenure, the Community Foundation has grown its assets from $135 million to $850 million.

She represents the Community Foundation and Western New York on several national and international boards including the National Collaborative for Health Equity, Generosity Commission, FSG and the Global Fund for Community Foundations. For her contributions, Clotilde has received numerous honors and awards, including accolades from the Points of Light Foundation, the Governor’s Award for Service, the President’s Award for Service and The Buffalo News Citizen of the Year Award. She was named the 2018 Buffalo Niagara Executive of the Year by the University at Buffalo School of Management. She has also received the Dean’s Service Award from the State University of New York at Buffalo Graduate School of Education and the Canisius College Distinguished Citizen Award.

“It has been the honor of a lifetime to serve our community through the Community Foundation’s commitment to meaningful change. That has always been — and always will be —our north star,” said Clotilde Perez-Bode Dedecker. “I’m inspired by our incredible clients and partners that come together day in and day out to drive solutions that address our community’s most pressing challenges. Betsy has been a valued colleague as we have worked to advance our vision of a more vibrant and inclusive Greater Buffalo region with opportunity for all.”

Betsy joined the Community Foundation in 2009, and in 2011, she was promoted to the newly- created role of Vice President of Giving Strategies. She was named Executive Vice President in 2017 as part of leadership succession planning. Betsy currently leads the Community Foundation team that works side-by-side with clients to understand what inspires their unique charitable giving and ensure those wishes are carried out today, tomorrow and forever.

Nationally, Betsy works with the Council on Foundations where she trains incoming community foundation professionals around the country. She also works with CF Leads, a national network of community foundations, to advance the practice of community leadership. Locally, she has served on numerous boards including: Child & Family Services; Elmwood Franklin School; and WNY Women’s Foundation.

Prior to joining the Community Foundation, Betsy spent 11 years working in New York City in financial services. She received her B.A. in Economics from Franklin & Marshall College and M.A. in Social Work from the State University of New York at Buffalo.

About the Community Foundation for Greater Buffalo